A blog of a an EPFL digital humantities project.

Key Accomplishments of the Last Period

Upcoming Tasks for the Next Period

All significant events in Nietzsche’s life have been extracted and imported in the database. Interpersonal relationships are left to be inferred from the collected biographical information for the completion of the data analysis.

Several changes have been applied to the conceptual model:

In addition, the Agent entity has been renamed to Participant, and it now participates in a single many-to-many relationship with Event. This help us define different thematic roles for all nouns, present in a sentence describing an event, and thus preserve more relevant and structured information (see Thematic Roles, from ref. 1). Typical thematic roles include: agent, patient, theme, recipient, beneficiary, location, origin, direction, instrument, experiencer.

The final conceptual data model (version 1.3) for the project is available for download at https://nietzschebiography.files.wordpress.com/2013/05/conceptual_model_v1-3.pdf

The physical data model for the project  is available for download at https://nietzschebiography.files.wordpress.com/2013/05/physical_model_v1-0.pdf

The project web site user interface was based on Bootstrap, an open-source template which simplifies meeting current market requirements on website UIs. Thanks to this decision, making the web site adaptable to various screen sizes and compliant with the newest WWW standards was made much easier.

Below you may see a few screenshots of the user interface design: 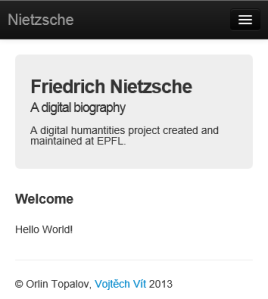 The project relational database model was continuously updated and has now reached a pre-release version that may be already used as a basis for further programming work. The model was therefore exported from the designer into SQL DDL and this script was launched on MySQL database that is part of our Windows Azure project web site.

On the screenshot below, you may see the tables stored in the project database. 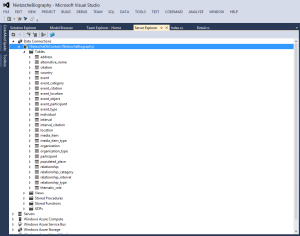 Since we chose Microsoft ASP.NET MVC as the backend technology and it is based on Microsoft .NET Framework, an object oriented programming platform, it was convenient for us to use ORM software as a data access layer in order to bring the relational and object oriented worlds together. For this purpose, we chose Entity Framework v5.0, a Microsoft’s official ORM technology, especially due to a very good tooling support.

To make the ORM work, however, it was necessary to create an object equivalent of the relational database model. The screenshots below show the resulting object model. 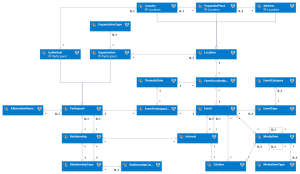 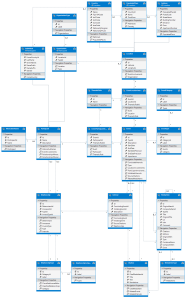